Initially available to anyone who played either Halo: The Master Chief Collection or Halo 5: Guardians between September 6, 2016 and September 23, 2016, the M12S Warthog CST has been featured in several Forzathon events in Forza Horizon 3:

The M12S Warthog CST launches off the line with little to no wheelspin despite having a central differential with a 86% bias towards the rear. Reaching 60 mph (97 km/h) in 4.8 seconds, the M12S Warthog CST has decent acceleration but is limited by its low top speed of 119 mph (192 km/h). 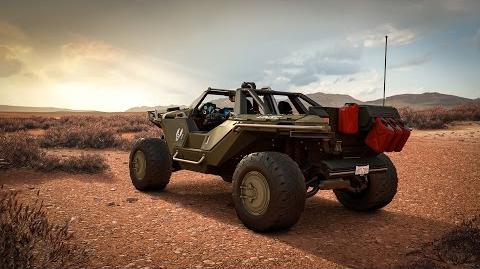 Retrieved from "https://forza.fandom.com/wiki/AMG_Transport_Dynamics_M12S_Warthog_CST?oldid=64136"
Community content is available under CC-BY-SA unless otherwise noted.