watch 04:21
Wiki Targeted (Games)
Do you like this video?
Play Sound

"You might think that Ferraris should be mid-engined. And this one isn't. You might think Ferraris should have V12s. And this one doesn't. It's called the California, and you have to ask, what's the point of it? Certainly, it's not very pretty, and it has literally the worst built-in telephone of any car in the world. Unless of course you've always wanted to spend your life accidentally phoning everyone you know whose name starts with A. But, on the plus side, it's got a metal folding roof, it's reasonably nice to drive, and it means Ferrari can take money from people who might previously have bought a Mercedes SL which means they can afford to develop proper, wonderful supercars like the 458. So you see, the California does have a point after all."
—Autovista (by Jeremy Clarkson)

The 2009 Ferrari California - abbreviated as Ferrari Cali - is a RWD grand tourer by Ferrari featured in Forza Motorsport 3 and all subsequent Forza main titles except Forza Horizon 4.

It is featured in Forza Horizon 2 as part of the Pre-Order Car Pack, and in Forza Motorsport 6 as a Unicorn car.

The California is Ferrari's first V8-powered front-engined car and was designed with a stronger emphasis on everyday use than other Ferrari models. As such, it is also the first Ferrari with a retractable hardtop.[1] It was named after the 1957 Ferrari 250 California.

It is driven by a redesigned V8 engine from Ferrari F430 with drysump lubrication and direct injection for improved fuel economy. Although power has been decreased by 30 hp (22 kW) to 453 hp (338 kW), the California produces more torque, which is 357 ft·lb (485 N·m).

Its engine is mated to a rear-mounted seven-speed dual clutch transmission, the first application of a dual clutch gearbox in a production Ferrari, which allows it to change gears seamlessly.

In order to offset additional weight caused by its hardtop construction, the California uses carbon-ceramic brake discs for improved stopping power and aluminum components for its bodywork and chassis, bringing weight down to a moderate 3825 lb (1735 kg).

Thanks to a transaxle architecture, the California has a rear-biased weight distribution. At the rear, a multilink suspension is used to complement the car's double wishbone front suspension, another first for a Ferrari.[1] 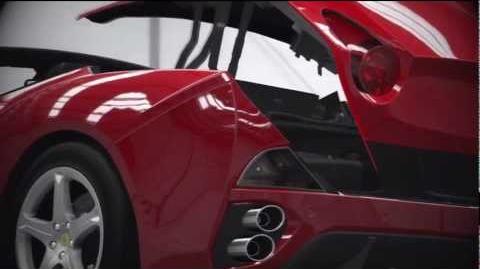 Retrieved from "https://forza.fandom.com/wiki/Ferrari_California?oldid=78616"
Community content is available under CC-BY-SA unless otherwise noted.