The 2002 Ferrari Enzo Ferrari is a mid-engined supercar by Ferrari featured in all main series titles.

Named after Ferrari's founder, the Enzo Ferrari is the successor to the Ferrari F50 and was replaced by the Ferrari LaFerrari hybrid hypercar in 2013. It is also Ferrari's last mid-engined, non-hybrid production model with a V12 engine.

The Enzo Ferrari features a Formula One-esque electrohydraulic shift six-speed semi-automatic transmission, active aerodynamics (the first for a road-going Ferrari), and traction control, the latter two of which are banned technologies in Formula One.

The 2005 Ferrari FXX is a track variant featured in all Xbox 360 Forza titles, and in the Forza Horizon 4 Car Pass since Update Three. 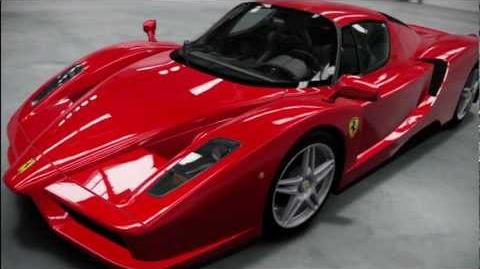 Retrieved from "https://forza.fandom.com/wiki/Ferrari_Enzo_Ferrari?oldid=70882"
Community content is available under CC-BY-SA unless otherwise noted.