< Forza Horizon
View source
watch 02:53
GTA: The Criminal Enterprises - The Loop
Do you like this video?
Play Sound
STUB 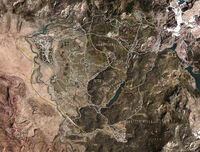 The Colorado 2012 Festival in Forza Horizon is set within Colorado, USA.

The festival location is made up of several types of roads, with highways being highlighted in yellow and dirt roads being coloured brown.

Two highways can be found, with one being located on the westside going from Redfoot Ranch to Carson, and the other going from Clear Springs to Gladstone. Located to the north-east of the Montano Plains is a golf course split into two, with the east side being drivable with many hills and bumps to jump over.

Located on the north-west side of the festival is Carson, one of the major areas of the game, home to a Horizon Outpost, a Street Race Hub, and many blocks of tight city streets filled with traffic to dodge and alleyways to drive through.

In the south-west area of the festival is a large two-lane canyon road going from Montano Plains to Red Rock. This is a lengthy road with many turns, and is great for drifting along. After reaching the end, players are greeted by Red Rock, a small settlement located at the end of the canyon.

On the north-east corner is Finley Dam, which seems to have a resemblance to Hoover Dam, and also has a bridge.

The main stage of the festival is located in the center with a recognisable ring road. The main stage has many dedicated posts, with each available for different tasks: