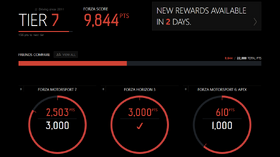 Forza Rewards is a loyalty rewards program that can be accessed on forzamotorsport.net or Forza Hub. It was introduced on August 19, 2013 for Forza Motorsport 4 and Forza Horizon,[1] and has been made available for every subsequent Forza main release.

Players logging into the site receive credit rewards that can be redeemed weekly. Higher credit payouts become available as players raise their Tier for increasing their Forza Score upon achieving game milestones.

Every player starts at Tier 1 and becomes eligible for weekly rewards after reaching Tier 2. For every subsequent Tier, players receive higher credit payouts, with the highest payout becoming unlocked upon reaching the highest possible Tier.

Points counting towards the player's Forza Score are earned from achieving various milestones on Forza Motorsport 2 and every subsequent Forza release except for the Xbox 360 release of Forza Horizon 2.

Loyalty rewards are bonus rewards for reaching higher Tiers, owning specific games or downloadable content and achieving exceptional milestones. They include additional credit rewards, cars and Driver Gear, and are given out cumulatively.

*Does not include the Xbox 360 release of Forza Horizon 2