watch 03:41
Wiki Targeted (Games)
Do you like this video?
Play Sound

“
Ready to put the “hot” in hot hatch? Honda’s latest is a track-ready, five-door hatchback that pulls out all the stops in performance and styling; from the functional scoops and curves that feed the turbo-charged 2.0-liter four-cylinder and aid in aerodynamics, to the massive wing that screams “Look at me!” and delivers massive downforce. The chassis tuning is sublime and immensely precise; little wonder that the Type R set the front-wheel drive production car record at the Nürburgring. So, race it! Pit this 306-hp front-wheel-drive sweetheart against the best in its division and enjoy the view from the top step of the podium.
—Official description[1]
”

The 2018 Honda Civic Type R - abbreviated as Honda Civic '18 - is a FWD hot hatch by Honda that was added to Forza Motorsport 7 for free with the May 3, 2018 update, and is featured as a seasonal reward in Forza Horizon 4.

With this generation of the Type R, codenamed FK8, Honda reintroduced an independent rear suspension, while further refining the car's already outstanding aerodynamics with front tire air curtains and vortex generators on the roof. Its K20C1 engine was also used by its predecessor, although it comes with additional power on European and Japanese models.[3]

Similar to its predecessor, the FK8 Type R set a new lap record for FWD cars at the Nürburingring on April 3, 2017, which was completed in 7:43.8 min by a development model close to production specifications.[4]

The 2016 Honda Civic Coupe GRC is a coupé rally variant featured in Forza Horizon 4 as part of the Car Pass. 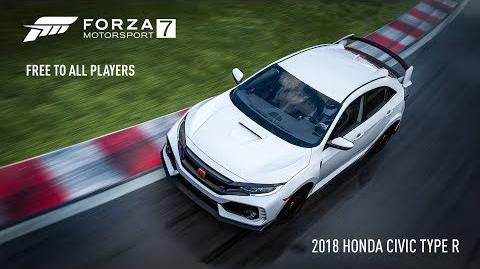 Retrieved from "https://forza.fandom.com/wiki/Honda_Civic_Type_R_(2018)?oldid=76803"
Community content is available under CC-BY-SA unless otherwise noted.