watch 03:41
Wiki Targeted (Games)
Do you like this video?
Play Sound

The Horizon Wheelspin is a spinning prize reel, stylized as a slot machine, featured in the Horizon series.

The Horizon Wheelspin is obtained each time the player achieves a new driver level. Once activated, the reel will spin at a very high speed before slowing down and stopping at a prize.

Prizes can either be credits or a new car, although the wheelspin may feature a greater proportion of car prizes than credits. In Forza Horizon 4 it is also possible to earn character customization items and car horns.

Having a VIP membership in Forza Horizon 2 and Forza Horizon 3 will double credit rewards, and for cars will include their selling credit value (Horizon 2 only).

A Super Wheelspin in Forza Horizon 4 grants three prizes with a higher chance of rare items for a single wheelspin.

Players receive Super Wheelspins for levelling up a Horizon Life progression series, from purchasing a specific Player House or from purchasing one directly in the Forzathon Shop. 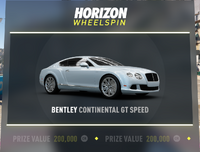