The 2006 Hummer H1 Alpha - abbreviated as Hummer H1 - is an AWD offroader by Hummer featured in Forza Motorsport 4 and all subsequent main titles except for Forza Horizon, which features an open-top variant instead.

Its standout feature from the standard H1 was a 6.6L turbocharged version of GM's Duramax diesel engine, which was extensively modified to retain the car's ground clearance.

The H1 Alpha entered production in January 2005 and was discontinued in May 2006. A total of 729 units were produced.

It is primarily unlockable as a Wheelspin prize in Forza Horizon 4, but has also been made available as a seasonal reward five times: 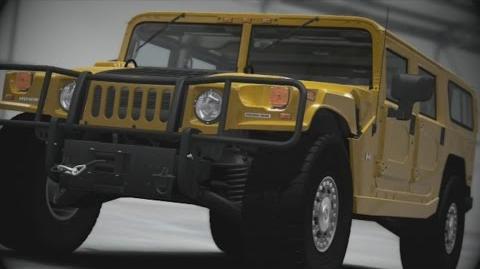 Retrieved from "https://forza.fandom.com/wiki/Hummer_H1_Alpha?oldid=71308"
Community content is available under CC-BY-SA unless otherwise noted.