The 2013 McLaren P1 is a RWD hybrid hypercar by McLaren featured in Forza Motorsport 5 and all subsequent titles.

The McLaren P1 (short for "Position 1", motorsport term for "first place") is the successor to the 1993 introduced McLaren F1. It is designated as McLaren's second model in its "Ultimate Series" model range, with the first model being the F1. The P1 was manufactured from 2013 to 2015 in a limited production run of 375 units.[2] A third model in the Ultimate Series debuted in 2018 with the track-focused McLaren Senna.

Designed as a plug-in hybrid hypercar, the P1 is powered by the twin-turbocharged 3.8 liter 'M838TQ' V8 engine, a variation of the M838T engine that debuted with the MP4-12C. Working in conjuction with an electric motor that delivers torque during the build-up of the turbochargers, the entire powertrain produces 903 hp (673 kW) and 664 ft·lb (900 N·m) of torque in total. Power is transmitted to the rear wheels through a seven-speed dual-clutch transmission.

The aero-efficient body along with an active rear wing and flat underbody allow the P1 to produce 1322 lb (600 kg) of downforce at 160 mph (257 km/h) in Race mode. The P1 uses airbrakes instead of heavier traditional hydraulic brakes and carbon ceramic brake calipers for maximum stopping power. The braking system can also charge the battery of the electric motor by directing waste energy into it.[3]

As a light rear-wheel drive car, the P1 offers well-rounded handling for quick cornering. High-speed stability is ensured by an aero-efficient body, while the braking performance is aided by the deployed rear wing to increase air resistance.

The P1 is closely matched to the LaFerrari despite weighing 265 lb (120 kg) more, but loses against the AWD Porsche 918 Spyder in terms of acceleration, which in turn has a lower top speed than both aforementioned cars.

Due to the P1's tight gearing, it can benefit greatly from a top speed-oriented setup that exploits wider gearing to increase top speed to 295 mph (474 km/h).

In Forza Horizon 2, the Team Forza car is a reskinned P1 with a Ten Year Anniversary livery. In Forza Motorsport 6, it also has a Class R upgrade preset.

The 'Owen's Edition' was introduced in Forza Horizon 4 as part of Update 14. It is unobtainable but is viewable on the car selection screen of the blueprint editor and by drivatars.

It appears as a normal McLaren P1 but in lime green and has a bug that causes the license plate texture to appear at the top of the windscreen as a sticker. Other difference include slight performance stat differences and a black license plate from Forza Edition cars. 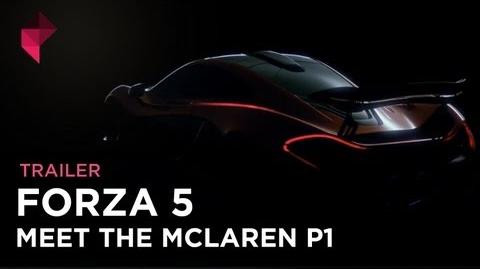 Retrieved from "https://forza.fandom.com/wiki/McLaren_P1?oldid=73037"
Community content is available under CC-BY-SA unless otherwise noted.