"The Mercedes-Benz 300SL represented such a huge leap forward in production car design, technology, and style that it is difficult to imagine just how revolutionary it was upon its introduction. Considering how iconic it has remained, and how well-known the car’s signature doors are even to non-enthusiasts, it certainly looks the part. Gullwing doors aside, the low coupe’s rakish profile looked nothing like the dinosaurs it shared the road with—all the more amazing considering how conventional most of Mercedes’ aging designs were at the time. As attractive as the body shell, resembling the W194 racer that inspired it, it’s what’s under the skin that makes the 300SL so groundbreaking. The 3-liter inline six cylinder engine, while related to the unit in the large Type 300 sedan, benefitted from the development it saw in action in the W194, and sported a new cylinder head and mechanical fuel injection to produce more than 240 horsepower in road-going trim. Like the racer, the Gullwing also utilized tube-frame construction, part of which passed through where conventional doors would go, which explains the distinctive door arrangement. The “SL” part of the name stands for “Sport Leicht,” or “sport light,” and the regular Gullwing was very light—but it could be made lighter by ordering the optional aluminum alloy body for a substantial fee. Speaking of substantial costs, the rare and beautiful Gullwing commands prices at auction that suit its position as the ultimate Mercedes road-going coupe."
—Official description[1]

It is featured as the third Barn Find in Forza Horizon. 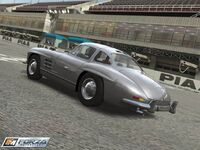