View source
watch 03:01
Wiki Targeted (Games)
Do you like this video?
Play Sound

"While Mercedes doesn’t refer to the new SLS AMG as the “Gullwing”, it is absolutely the return of the famed automotive icon. With more than 560 horsepower, the SLS AMG is a track tamer nearly without equal, and its classic, sophisticated lines will attract car lovers of every stripe."
—Official description[1]

The 2011 Mercedes-Benz SLS AMG - abbreviated as M-B SLS AMG - is a RWD supercar by Mercedes-Benz featured in Forza Motorsport 3 as part of the Stig's Garage Car Pack and as standard in all subsequent main series titles.

The Mercedes-Benz SLS AMG is a front-engine, RWD supercar equipped with gullwing doors. Its name stands for "Sport Leicht Super" (lit. Sport Light Super). Between 2009 and 2014, the SLS AMG received other variants, including a high-performance Black Series variant.

The SLS AMG was succeeded by the Mercedes-AMG GT S in 2014.

The SLS comes with only a seven-speed dual-clutch automatic that uses a carbon fiber shaft, and using a lightweight aluminum frame, the car weighs only 3571 lb (1620 kg) with standard wheels. 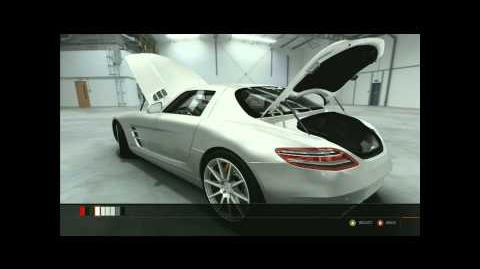