The 2018 GT2 RS holds a record for the fastest rear-engined production car at the Nürburgring Nordschleife, with a time of 6:47.10 minutes, beating AWD cars like the Porsche 918 Spyder and Lamborghini Huracán Performante.[2]

The 2018 GT2 RS has a magnesium roof and front lid, as well as a carbonfiber boot lid made. The front and rear aprons are made of lightweight polyurethane, while the side windows and rear silencers are made of polycarbonate and titanium, respectively. It has front and rear wings to produce downforce.

While cornering is also a strong performance trait for this car, the loose rear-end in combination with the 691 hp (515 kW) engine requires throttle control to avoid oversteer.

The 2019 Porsche 911 GT3 RS is a naturally-aspirated variant featured in all main series Forza titles since Forza Motorsport 7. 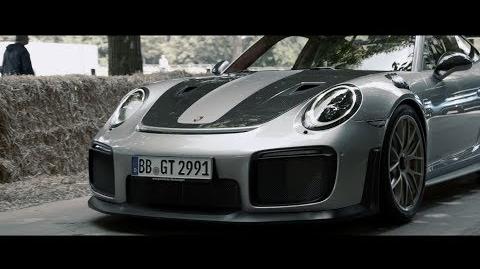 Retrieved from "https://forza.fandom.com/wiki/Porsche_911_GT2_RS_(2018)?oldid=78074"
Community content is available under CC-BY-SA unless otherwise noted.