It returned in all Porsche expansion add-ons for the Forza series and in Forza Horizon 3 as part of the Outback Field Trip and New Year's Special Forzathon events. It is featured as standard in Forza Motorsport 7, Forza Horizon 4 and Forza Street.

Codenamed Typ 980,[2] the Carrera GT was designed to replace the Porsche 911 GT1 Straßenversion as Porsche's newest halo car of the 2000s decade. Similar to the GT1, its development was closely tied with motorsport racing, although the Carrera GT was made to be more usable for everyday driving.

The Carrera GT has a monocoque chassis that features strong structural rigidity and only weighs 220 lb (100 kg) thanks to using carbon fiber, aluminum and other materials. In order to maintain stability at high speeds, the Carrera GT uses underbody diffusers that work in combination with a rear wing to make use of ground effect, effectively increasing downforce as a result. Its chassis is also equipped with pushrod-actuated inboard suspension, heavy-duty carbon ceramic brakes and weighs 3528 lb (1600 kg) in total. The rear wing of the Carrera GT is deployed at speeds above 70 mph (113 km/h).[3]

The Carrera GT's main strong suit is straight-line performance as it can hit at least 205 mph (330 km/h) and go from 0 to 100 mph (161 km/h) in only seven seconds. As a result, the Carrera GT is up to par with most modern supercars such as the 2012 Porsche 911 GT2 RS in that field. Due to a high weight, the Carrera GT tends to understeer in sharp bends although it produces sufficient downforce for handling high-speed corners. However, the strong engine output also requires precise throttle controls upon corner entries as its rear tends to break out in poorly-executed corner entries. 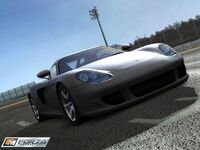 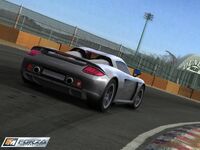 Retrieved from "https://forza.fandom.com/wiki/Porsche_Carrera_GT?oldid=69750"
Community content is available under CC-BY-SA unless otherwise noted.