"The Eliminator is Horizon's take on the Battle Royale! Up to 72 players battle to be the last one standing. Honk your horn at opponents to challenge to a head-to-head, then win to eliminate them and upgrade your car. Keep an eye out for Car Drops as another way to upgrade, and stay away from the the ever-shrinking arena wall!"
—In-game description (Forza Horizon 5)

The Eliminator is a player versus player multiplayer battle royale game mode in Forza Horizon 4 and Forza Horizon 5, in which up to 72-players face-off against each other in a shrinking arena until only one player remains.

It was introduced to the Forza series as part of Update 17 for Forza Horizon 4, released on December 12, 2019, after being announced during the "Forza Monthly - December Edition" livestream on December 11, 2019.[1]

Participants are limited to only single players, and can not join as a convoy. The Eliminator is made available very early in either game it is featured in:

Players can enter a session of The Eliminator by either driving to its event location or through the pause menu:

Each session of The Eliminator includes up to a total of 72-players, all of which are battling against each other to be the last remaining player in the session and be dubbed 'The Eliminator.'

Players can enter The Eliminator by either driving to its event location or through the pause menu.

Joining a session of The Eliminator does not require a player to have any specific cars nor be at any level beyond having completed the career prologue, as all players are given a specially tuned level 1 car; a 1965 Mini Cooper S in Great Britain or a 1963 Volkswagen Beetle in Mexico.

As players enter a session, they are grouped together through matchmaking, and once a session has reached a sufficient number of participants, a session of The Eliminator will begin.

Head-to-Head events in The Eliminator are one-on-one sprints to a random finish point within an arena, and is only between two players per event, with neither participant being allowed to reject a challenge. The winner is the first driver to reach the placed finish point.

Players can challenge other drivers to a Head-to-Head by being close enough to them for a prompt to appear to challenge them. At which point, either player can challenge the other by looking at their vehicle and honking their horn.

After which, the finish point they are both competing against each other to reach is shown in the world with tall checkpoint mark, an icon of its direction and location on the map, and a possible route on the mini-map using mapped routes.

Finish points are typically placed closer to the arena wall at various stages, and may force players to race outside of the arena during a contraction.

The first player to reach the finish point is the winner, and they are given a choice for their reward of either taking their opponents car by pressing right or increasing their current car level by one by pressing left, and may also choose to cancel receiving a reward by pressing down. Regardless of which choice the winner makes, the losing driver is eliminated from the current session.

The arena is determined by a dome circle outline shown on an area of the map, but it is not present during the initial few minutes of a session. As players spawn at their start locations, they're given an opportunity to explore their vicinity for other drivers to challenge or car drops to inspect before the first stage of the arena is outlined.

Players are notified when the arena is shrinking with either a timer counting down to its next reduction or a notification if it is currently shrinking in the top-left corner of their HUD. During the last 10 seconds of a shrinkage countdown, a notification is shown in the centre of the player's HUD to inform then that the arena is about to begin shrinking.

A projected dashed pink circle is used to highlight the edge of the arena following the completion of its next stage of shrinking.

The arena itself is shown to the player as a large pink dome with white crosses towering high into the sky, and the current edge of the dome is shown as a solid pink circle with hatching along the outside.

Direction to next Arena Edge

Once a session of The Eliminator has begun, players have 10 seconds to select a location on the map they wish to begin from.

All of map is open and any point can be selected as the player's start point, as the arena circle can not be seen or has not yet been placed.

Stage 1 of the arena occurs shortly after all participants have chosen their start location and successfully entered their session of The Eliminator. This is the first stage in which the arena appears and will pull players into a location roughly half the size of the map.

It will shrink from outside of the map to the size of the projected dashed circle on the payer's map.

The arena will shrink at a slow rate entering stage 1, as players joining the session may still be spawning at their start location, and many players are likely still driving a level 1 car.

Stage 2 of the arena occurs up to two minutes after the arena has reached the projected dashed circle for stage 1, and will pull players into a location roughly a quarter the size of the map.

Once the countdown has completed, the arena will begin to shrink to the current projected dashed circle , and its new central point may not be aligned to the centre of stage 1, resulting in some areas of stage 1's arena being further outside the stage 2 arena than others.

Stage 3 of the arena occurs up to one minute and forty-five seconds after the arena has reached the projected dashed circle for stage 2, and will pull players into a location roughly an eighth the size of the map.

Once the countdown has completed, the arena will begin to shrink to the current projected dashed circle, and its new central point may not be aligned to the centre of stage 2, resulting in some areas of stage 2's arena being further outside the stage 3 arena than others.

Stage 4 of the arena occurs up to one minute and thirty seconds after the arena has reached the projected dashed circle for stage 3, and will pull players into a location roughly a sixteenth the size of the map.

Once the countdown has completed, the arena will begin to shrink to the current projected dashed circle, and its new central point may not be aligned to the centre of stage 3, resulting in some areas of stage 3's arena being further outside the stage 4 arena than others.

Upon reaching its smallest arena size, the Final Showdown is triggered once twelve to eight drivers left during stage 4.

The Final Showdown is the last stage of The Eliminator, with it being highlighted to players by both the announcer and a thirty second countdown timer. At which point, head-to-head events are disabled and players are notified to prepare for the final race.

Once the countdown timer has completed, all players are given the same finish location to race towards, which will be placed at a location outside of the stage 4 arena.

A Timeout meter appears in the top-left corner of the player's HUD, if they leave the confines of the arena during a session of The Eliminator, and they will be eliminated should they build up too much cumulative time outside of the arena, in which they will be timed out of their session.

Up to 60 seconds can be built up outside of the arena in a player's Timeout meter, but the time incurred can not be removed or reduced, as it is cumulative across all stages of their current session in The Eliminator. Players driving outside of the arena during stage 4 will incur a greater built up of time towards a timeout.

Outside of the arena, players build up time towards their Timeout meter, and they will be eliminated should their meter be completed filled. The player's view outside the arena is desaturated to a near monochromatic point with excessive use of chromatic aberration.

Drivers can hide for as long as they wish, as those hiding don't appear on the mini-map for those not hiding or other players currently hiding, but they can still be eliminated by a timeout outside of the arena, challenged to a Head-to-Head by any other driver, or kicked for inactivity.

All cars in The Eliminator are given to players for the current session by either beating other players in Head-to-Head events or from Car Drops.

Each car has a specific car level and is used to signify its performance rating compared to other cars used in The Eliminator.

During the start of The Eliminator, all players are given the same level 1 car, but they can choose their own means of upgrading to higher a level car, selecting other cars of the same level, or downgrading from their current car's level.

Cars of the same car level typically have a similar performance rating although different vehicles could be better suited for different circumstances with a variety of roads, dirt roads, cross country routes, and terrain to content with.

Car Drops are shown as hovering drones combined together into a triangular shape with "The Eliminator" branded banners, purple smoke flair, continually fire out confetti, and play any radio station music the player is listening to over a loud speaker.

Their placement is purposefully obvious for players to swap between their current car and a car offered by a drop location, but they are never shown on the player's mini-map.

Approaching a Car Drop will display above the hovering drone the car level and the car offered for collection. Driving beneath it will show a prompt and allow the player to collect the vehicle offered by the Car Drop.

Car Drops can not be collected during a Head-to-Head event or during the Final Showdown.

In Forza Horizon 4, completing sessions of The Eliminator will reward players with credits and influence towards their driver level.

Players will also be rewarded with influence specifically for their level in The Eliminator, which can be viewed from The Eliminator list within the player's Horizon Life section of the pause menu.

In Forza Horizon 5, completing sessions of The Eliminator will reward players with credits and influence towards their driver level.

Players will also be rewarded accolades for completing any challenges pertaining to The Eliminator, which can be viewed from Online: The Eliminator list within the player's Accolades section of the pause menu.

Prior to the "Forza Monthly - December Edition" livestream, a Playground Box Truck with branding for The Eliminator and a 'SOON' license plate was introduced as a traffic vehicle with Update 16, and could be found driving along roads in Britain.[2]

Another teaser was shared by the official Playground Games twitter account on December 9, 2019, it involved team members investigating connections between the Toyota Supra RZ, the Wind Farm, and wild cougars.[3] 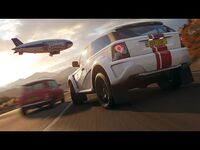 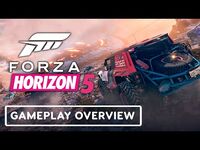