"Designed and built by Toyota Team Europe (TTE), the Toyota GT-ONE competed in the LMGTP class at the 24 Hours of Le Mans. The chassis proved to be very competitive and brutally quick, qualifying 1st, 2nd and 9th for the 1999 race, even though they didn't compete in the top class. After the green flag dropped, the race proved to be a war of attrition with Audi, Mercedes-Benz and Nissan having to retire most of their entrants, and the Toyotas suffering tire problems throughout. Entering the final hour of the race the #3 Toyota GT-ONE driven by Ukyo Katayama, Keiichi Tsuchiya and Toshio Suzuki had the overall lead. Unfortunately they suffered a tire failure and were passed by the #15 BMW Motorsport V12 LMR. The #3 GT-ONE ended up finishing a very respectable 2nd overall, and 1st in the LMGTP class. Even though the GT-ONE would never win an endurance event outright, the chassis and aerodynamic designs were so revolutionary that they would influence future Le Mans prototypes for many years to come. "
—Official description[1]

You can help the Forza Wiki by adding to this article 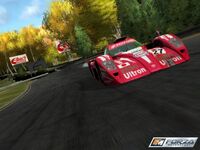